Prisca Salazar-Rodriguez is a partner at Bolton-St. Johns who most recently served as the Director of the New York office of Hilltop Public Solutions. A national full-service public affairs firm with offices throughout the United States. Prior to Hilltop Prisca served as the Director of Executive Operations and Scheduling for New York City Mayor Bill de Blasio. She began her career in government and politics in the Office of the Bronx Borough President where she served 3 borough presidents during her 22-year tenure in the office. Prisca worked her way up from a summer intern to Deputy Chief of Staff to Bronx Borough President Ruben Diaz, Jr. before joining the de Blasio Mayoral administration. Prisca also served as the director of operations and scheduling at Empire State Development Corporation under then Chairman Pat Foye. As a seasoned public servant who has held increasingly responsible positions at all levels of government for over two decades, Prisca has relationships that she has nurtured throughout her career which afford her a certain credibility as someone that appreciates the process and perspective of others. She has developed management skills that translate into solid initiatives that advance the needs of a district, industry, or constituents. Known for her down-to-earth, pragmatic style that also welcomes challenges, she is adept at assessing and managing risk. Along with her public administration skills, Prisca has worked on several national and local political campaigns from First Lady Hillary Rodham Clintons campaign for United States Senate to recently Ray McGuire’s campaign for New York City Mayor. Prisca proudly serves on the Board of Trustees of Odyssey House, on the Board of Trustees of the Earl Monroe New Renaissance Basketball Charter School, as well as on the Board of Directors of SoBro, the leading economic development non-profit in the South Bronx. Prisca has been recognized by City and State New York as one of the New York’s Top 50 Political Consultants (2019); as one of the Latino 100 Power Diversity (2021); and as one of the Responsible 100 New Yorkers (2021). Prisca is a native New Yorker, born in the Bronx, the borough where she currently resides with her husband, Jose Rodriquez, and sons Javier and Jose Andres. 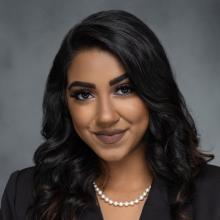